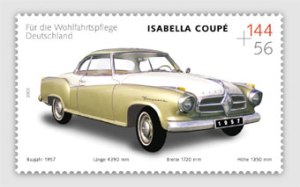 German Isabella stamp from 2002. This was accompanied with a real Isabella of similar colour (as part of the launch of the stamps), here’s a poor translation (apologies!) from German via Google translation of the story:

A report of our club member Klaus Werner

Each year, the Federal Ministry of Finance Wohlfahrtsmarken in favor of voluntary welfare out. For the Wohlfahrtsmarken 2002 German cars from the fifties were chosen as a motif. The selection of a lot on the car models BMW Isetta 300, Trabant P50, VW Beetle Bretzel, Mercedes Benz 300 SL and Borgward Isabella Coupe. The brands are available in the postage steps 45 + 20 ct., 55 + 25 ct. and 144 + 56 ct. working for the public welfare marks the company Michael Tost Public Relations GmbH was responsible in Dusseldorf. She organized the handing over of Wohlfahrtsmarken by Finance Minister Hans Eichel at Federal President Johannes Rau, patron of social work Wohlfahrtsmarken, on 04/12/2002 at Bellevue Palace in Berlin.

On this date, also an original vehicle should be presented to each brand motif. therefore the company Michael Tost Public Relations GmbH turned to Mr. Loges by Carl FW Borgward interest group to get an Isabella Coupe. Mr. Loges scoured the club records for a vehicle which has the same year and also a two-tone paint according to the model on the stamp.On 04 November therefore called me Mr. Loges and asked if I would be willing to put my car. Due to the unpredictable weather conditions, I wanted to clarify the transport of Isabella in an enclosed trailer before making a commitment first. I knew that our club member Klaus Peter Rost has a corresponding pendant and called him to explain my concern. He was equally ready to provide for a refund of the trailer with the towing vehicle. In a telephone conversation with the company Michael Tost Public Relations GmbH, the general running of the event as well as the assumption of the costs of transport and accommodation in Berlin was controlled. I was glad when Klaus Peter Rost ready told me to go to Berlin, because I move at the thought of such a team to Berlin alone was a little uneasy. At 14:11:02 we got from the Federal Association of Voluntary Welfare Association an invitation to the handover of Wohlfahrtsmarken 2002 Bellevue Palace in Berlin, the official residence of the President.

Isabella was born on 02December loaded in Soest on the trailer and then the next day it went off in the morning. At 16:00 clock we were standing in front of the official residence of the German President. Here the car was unloaded and – after extensive security check -. Parked in the heated underground garage of the Ministry After we had our hotel in Berlin based on Lützowplatz, we spent after a long dinner the rest of the evening at our Borgward friend Dietmar Honest in the workshop and talked shop about the different Borgward models.