Some great images of Australian car production, a joint venture between Borgward and Sir Laurence Harnett, the ‘father of the modern Holden’.

The Lloyd-Hartnett Alexander sedan was an Australian version of a German microcar, the Lloyd Alexander 600, a joint venture between Sir Laurence Hartnett and German car maker Carl Borgward. It was assembled at Kangaroo Point in Brisbane, Queensland from parts shipped from the Lloyd Motoren Werke in Bremen, part of the Borgward group of companies.

The little Alexander featured four wheel independent suspension by leaf springs, rack and pinion steering, four speed synchromesh gearbox and ‘aircraft adjustable seats’ that folded down to form a bed. It had a top speed of 63 mph, cost 798 pounds and claimed first and second place in the 1958 Ampol Trial. A Lloyd-Hartnett Alexander can be seen at the Queensland Museum as part of its display of Queensland vehicles. 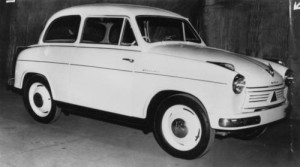 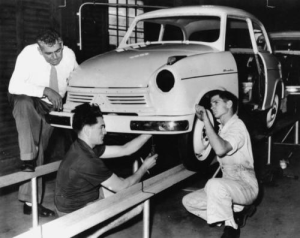 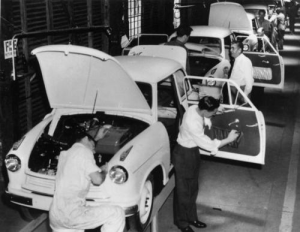 Text and images from the State Library of Queensland, link to item here: